This 2-week itinerary caters to those who have the time to explore this fascinating country, following the classic circular route that will show you the best, the most historic and by far the most scenic aspects Turkey has to offer. Get a feel for the…

This 2-week itinerary caters to those who have the time to explore this fascinating country, following the classic circular route that will show you the best, the most historic and by far the most scenic aspects Turkey has to offer. Get a feel for the awesome grandeur of Turkey as you delight in the treasures of Istanbul ranging from the rich and ornate legacy of the Byzantine palaces and cathedrals-turned-mosques to the glory of Topkapi, the pinnacle of Ottoman Empire wealth. After walking through the Grand Bazaar, head out for the battlefields of Gallipoli, the remains of the city of Troy, then enter a world of the great Greco-Roman ruins that line the Aegean coast. You will find the Roman city of Ephesus awe-inspiring and the site of the Virgin Mary’s home humbling.

After seeing the astounding hot springs cascading over white, mountainside pools at Pamukkale, head for the Mediterranean and the resort town of Antalya that combines seaside pleasures with Roman antiquities. Then it’s back into the interior to the heart of Cappadocia, a land of whirling dervishes and extraordinary sculpted landscapes where caves are filled with early Christian frescoes. The tour stops in Turkey’s capital so that you can visit the country’s premier museums of antiquities before returning to Istanbul at the end of a journey that will never be forgotten. 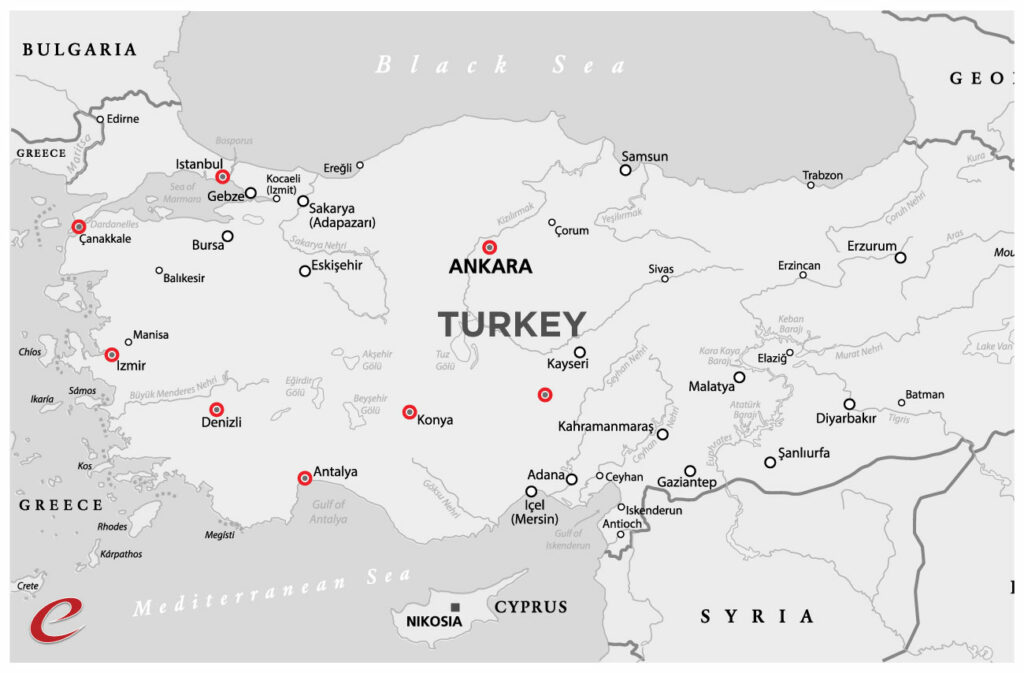 The Radisson Blu Hotel in Sisli, Istanbul, places guests within walking distance of Cevahir Shopping Mall as well as taxi, bus and metro transport, making it easy to explore the city. Many other shopping outlets as well as museums and historical attractions reside nearby, and ferry transportation is easily accessible. Inside the hotel, a stunning atrium greets visitors with elegant design and contemporary art fixtures. The hotel also houses 291 tasteful rooms and suites with amenities like LED television and complimentary coffee and tea. Guests can enjoy authentic Turkish as well as international cuisine at our on-site eateries. Steak n More Istan’bull Restaurant is open for every meal of the day, and Bon a Petit Cafe & Cake offers a great place for snacks and coffee throughout the day. The Botanica Fitness & Spa spans 3,000 square meters and offers pampering spa treatments, a fitness center and both indoor and outdoor pools.

Set in 12,000 m² of landscaped gardens overlooking the spectacular Kordon on the Aegean Sea, the luxurious five-star hotel Swissotel Büyük Efes, Izmir is conveniently located in the center of Izmir's commercial district, steps away from the heart of the city. Adnan Menderes Airport is less than 15 km away. At Swissotel Büyük Efes guests enjoy traditional Turkish and contemporary cuisine in a variety of stylishly elegant restaurants. A sumptuous breakfast buffet offers a wide range of choices to energise your day. The hotel rooftop terrace and Spa are ideal for relaxation, and guests have the chance to indulge in a calming massage before a dip in the outdoor hotel pool.

This hotel is next to the ancient thermal city Hierapolis ruins and travertine of Pamukkale. It is located 2km away from the Pamukkale ancient city and 1km to Karahayit Red Water. Other attractions nearby are the Denizli down town, the railway station, bus station and the airport. This hotel contains 327 rooms. Rooms are equipped with air conditioning, mini bar, plasma TV, safe, Wi-Fi, telephone, bathroom (bathtub/shower) balcony, hair dryer, tea set, and 24 hour room service.

This hotel is nearby the Antalya airport, and is situated near the city’s government buildings. Also a 5 minute walk is the Ataturk Cultural Centre, and a 15 minute bus ride to the ancient, narrow streets of the Old City. All standard rooms come equipped with views of the Mediterranean Sea and Bey Mountain. The rooms are furnished in a classic Seljuk style and include satellite TV, electronic safety deposit box, minibar, Wi-Fi, direct dial telephones and complimentary tea/coffee making facilities.

Relax in Hilton Garden Inn Konya, Turkey hotel situated in the center of historic Konya. Next to Mevlana Cultural Center and within walking distance of local attractions and cultural sites, the hotel combines convenience and comfort. Just 20 minutes from Konya Airport (KYA) and 2.5 hours by car from Ankara, Hilton Garden Inn Konya, Turkey is the ideal base for a stay in this fascinating city located in the heart of the Anatolia region. Rooms are furnished with a Garden Sleep System™ bed, LCD TV, refrigerator, complimentary Wi-Fi and workspace.

Imagine a place where mystical rock formations, underground cities and the history of thousands of years of civilisation sit under a vast sky. This place is Cappadocia and Kapadokya Lodge is your gateway to discovering one of the most incredible regions in the world. Kapadokya Lodge provides luxurious accommodation and services drawing architectural inspiration from the stunning landscapes of the region to bring you a unique combination of comfort and history.

In the center of Ankara, in Kavaklidere and Kizilay Square, offering easy access to the most popular points of the city like the Ankara Hilton offers guests a comfortable and memorable experience.
Noting with modern decor and comfort, ergonomic work chairs, large screen TVs, marble bathrooms, mini-bar with spacious guest rooms, suites and king
Executive rooms include free breakfast next to the check-in and check-out facilities for our guests staying, light snacks, hors d'oeuvres, beverages, desserts and privileges such as offering free international newspapers in the Executive Lounge
You can use in your business travels, fully equipped business center
Indoor swimming pool, gym, jacuzzi, sauna, Turkish Health Club is located within the bath and a massage room
draws attention to its special design, you can use your multi-purpose meeting rooms and ballroom events
The unique breakfast buffet, Greenhouse Restaurant with a menu full of flavor
You can take the stress of the day in a quiet atmosphere, offering a variety of cocktails and beverages Lobby Lounge and Lotus Bar
Located in close proximity to the hotel, tennis and squash courts. 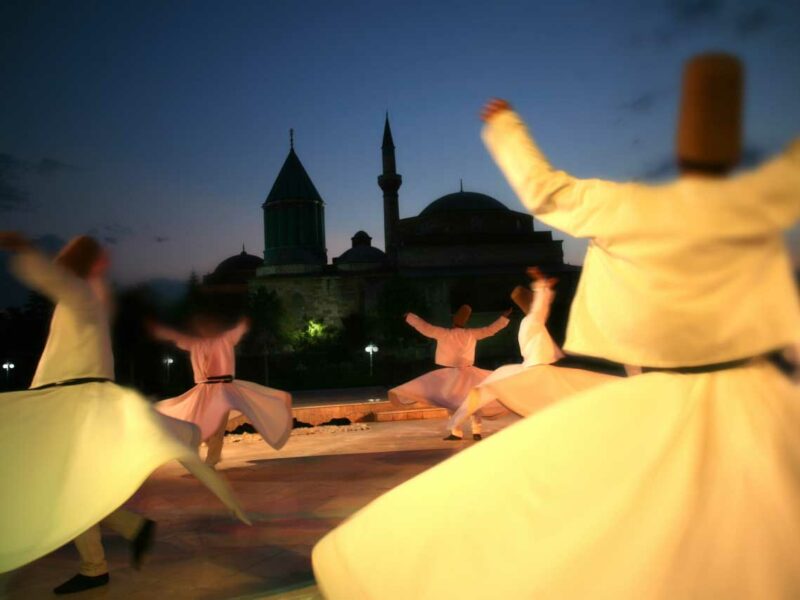 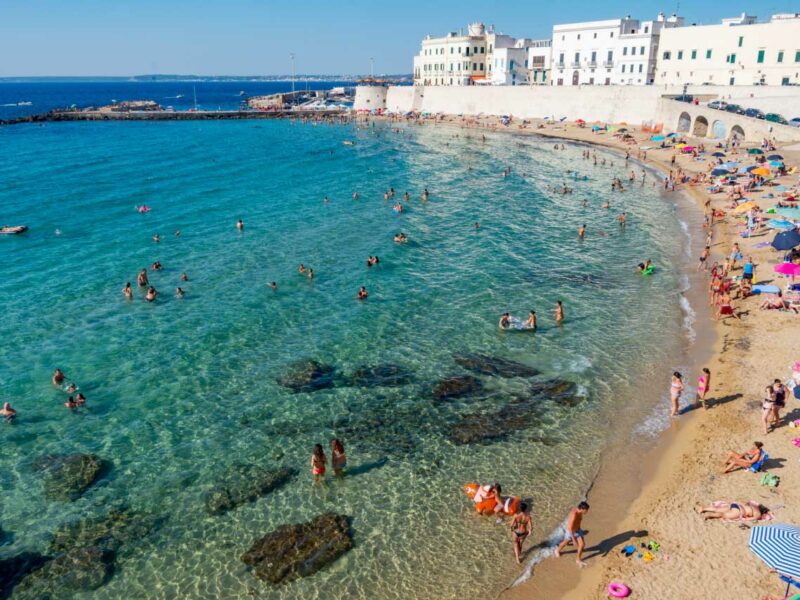 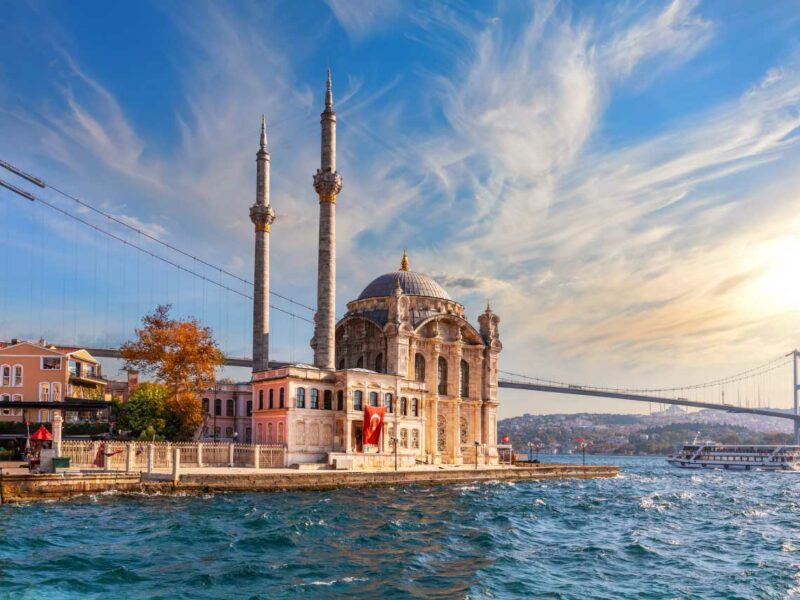 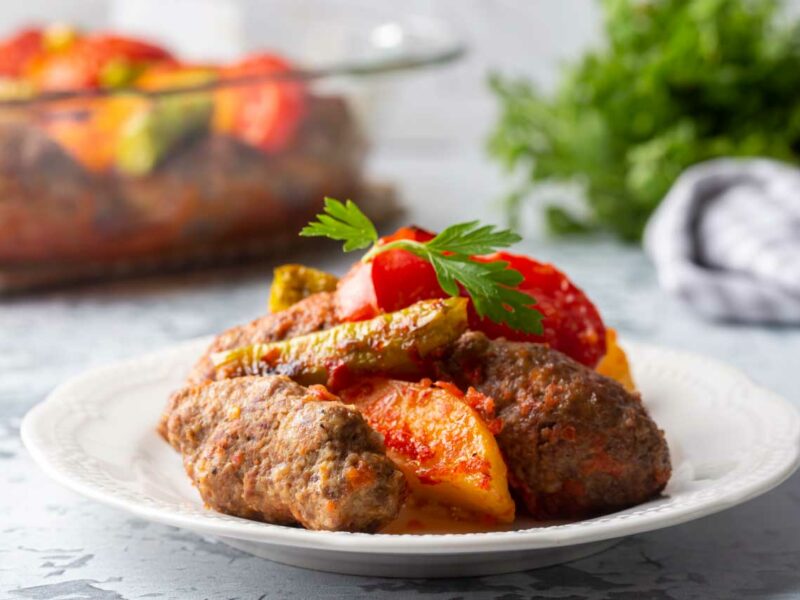 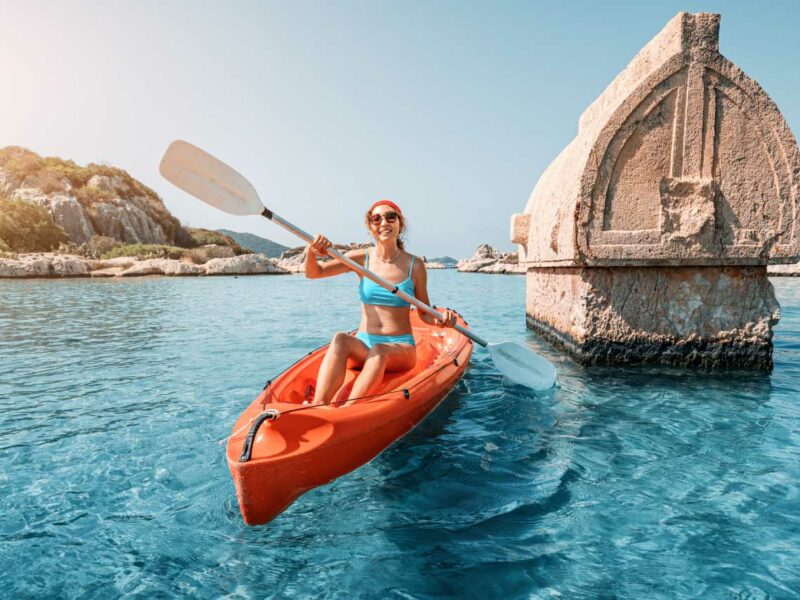 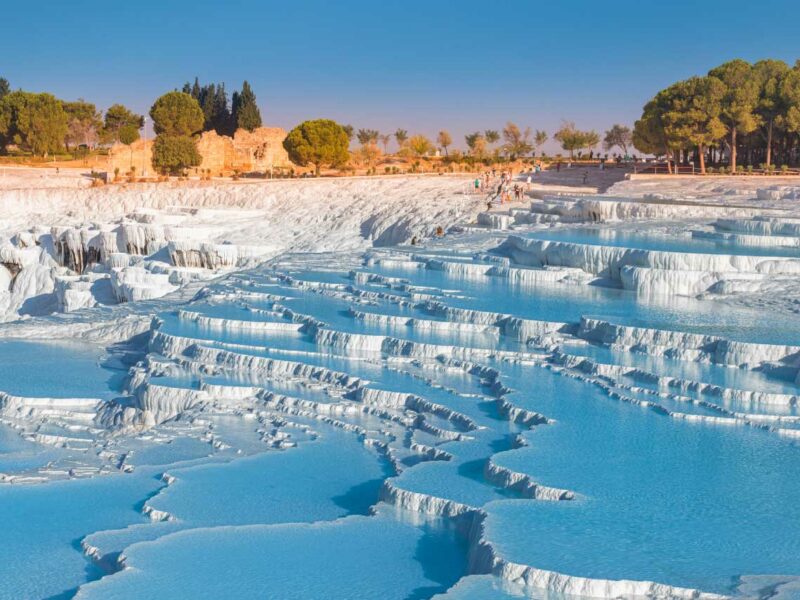 You are met at the airport and transfer to your hotel. This evening there will be a Welcome Briefing. Radisson Blu Sisli Hotel or similar (2 nights) Accommodation: Radisson Blu Hotel, Sisli
2

Today we set off on a full day tour of Istanbul. Included during this guided tour are: the magnificent Topkapi Palace (excluding harem), the Hippodrome, the Blue Mosque, St. Sophia and finally the Grand Bazaar. Tonight, there is an optional dinner with belly dancing entertainment (at additional cost). Included Meals: B
3

We set off this morning for Gallipoli to visit Anzac Cove, Chunuk Bair, Lone Pine Cemetery and the Gabate War Museum. Afterwards, we cross the Dardanelles to spend the night in Canakkale. Kolin Hotel or similar. Accommodation: Kolin Hotel Included Meals: BD
4

Today we visit Troy, with its famous wooden horse, best known for being the setting of the Trojan War, and many cities built on top of each other. Before arriving into Asclepion, enjoy lunch with locals in a traditional local village. Then continue to Pergamum to visit the ancient Medical Center in Asclepion and continue to Izmir for overnight. Swisshotel Izmir or similar (2 nights). Accommodation: Swissotel Grand Efes Izmir Included Meals: BLD
5

Tour the famous ruins of Ephesus, an important cultural center of the ancient world, and explore 2,000 year-old marble streets, a theater, the Library of Celsius, a gymnasium and Hadrian’s Temple. Take a short drive to see St. Mary’s stone cottage where it is believed Virgin Mary spent her last years accompanied by St. John. Continue to a regional rug production center to have a firsthand experience of this unique art form. Optional: Dinner at local restaurant. Included Meals: B
6

In the morning drive to Antalya, arrive midday and pay a visit to the ancient Greek city of Perge, famous for its Temple of Artemis. Also located there is an acropolis dating back to the Bronze Age. It is also notable for being the home of the renowned, ancient Greek mathematician Apollonius. Enjoy a relaxing afternoon by the Mediterranean Coast. Crowne Plaza Hotel or similar (2 nights) Accommodation: Crowne Plaza Antalya Included Meals: BD
8

Today is a free day to explore on your own. There are also a number of Optional Excursions (at additional cost) such as a tour of the ruins at Phaselis or a relaxing yacht cruise along the Turquoise Mediterranean coastline. Dinner at a special local restaurant. Included Meals: BD
9

After breakfast depart for Konya, en route visit the ancient city Aspendos, known for having the best-preserved theater of antiquity. Visit the Mausoleum of Mevlana who was a Sufi philosopher. This was also the dervish Lodge of the Mevlevi Order, better known as the Whirling Dervishes. Continue to the Karatay Koran School, an 800 year-old building, once a Selcuk Islamic theological seminary, which houses an outstanding collection of ceramics and tiles. Overnight in Konya. Hilton Garden Inn or similar. Accommodation: Hilton Garden Inn Konya Included Meals: BD
10

In the morning, drive to Cappadocia, the land of the fairy chimneys. En route, visit a 13th century caravanserai. Pay a visit to the underground city of Saratli, one of the many underground settlements built for protection and religious reasons. Enjoy dinner at a local restaurant and join an optional Whirling Dervishes performance. Nevsehir Kapadokya Lodge or similar (2 nights). Accommodation: Nevsehir Kapadokya Lodge Included Meals: BD
11

Early this morning there is an optional Hot Air Balloon excursion (at additional cost) where we float above volcanic valleys with their fairy chimneys and caves as the sun rises over Cappadocia. After breakfast visit Goreme, a historical region of Turkey, located among the rock formations, which was first settled back in the Roman period. Many rock churches can still be seen today, as Christianity was then the prevailing religion in that region. Continue to the town of Avanos renowned for its high quality earthenware. Also visit Pasabagi, Red Valley and attend a brief regional pottery workshop in a cave. Included Meals: BD
12

In the morning, depart for the capital city of Ankara through the salt lake area. Enjoy an afternoon tour of the Ataturk Mausoleum and the Museum of Anatolian Civilizations, a historic caravanserai holding artifacts from up to 7500 years old including the most extensive and valuable collection of Hittite artifacts in the world. Ankara Hilton Hotel or similar. Accommodation: Ankara Hilton Hotel Included Meals: BD
13

After a scenic morning drive we arrive in Istanbul. The afternoon is free to explore this exotic city on your own or take an optional excursion (at additional cost) of a cruise on the Bosphorus including last minute shopping in the Spice Market. Tonight we bid each other goodbye at a farewell dinner. Radisson Blu Sisli Hotel or similar. Accommodation: Radisson Blu Hotel, Sisli Included Meals: BD
14

After breakfast, we will transfer you to the airport for your flight home. Included Meals: B 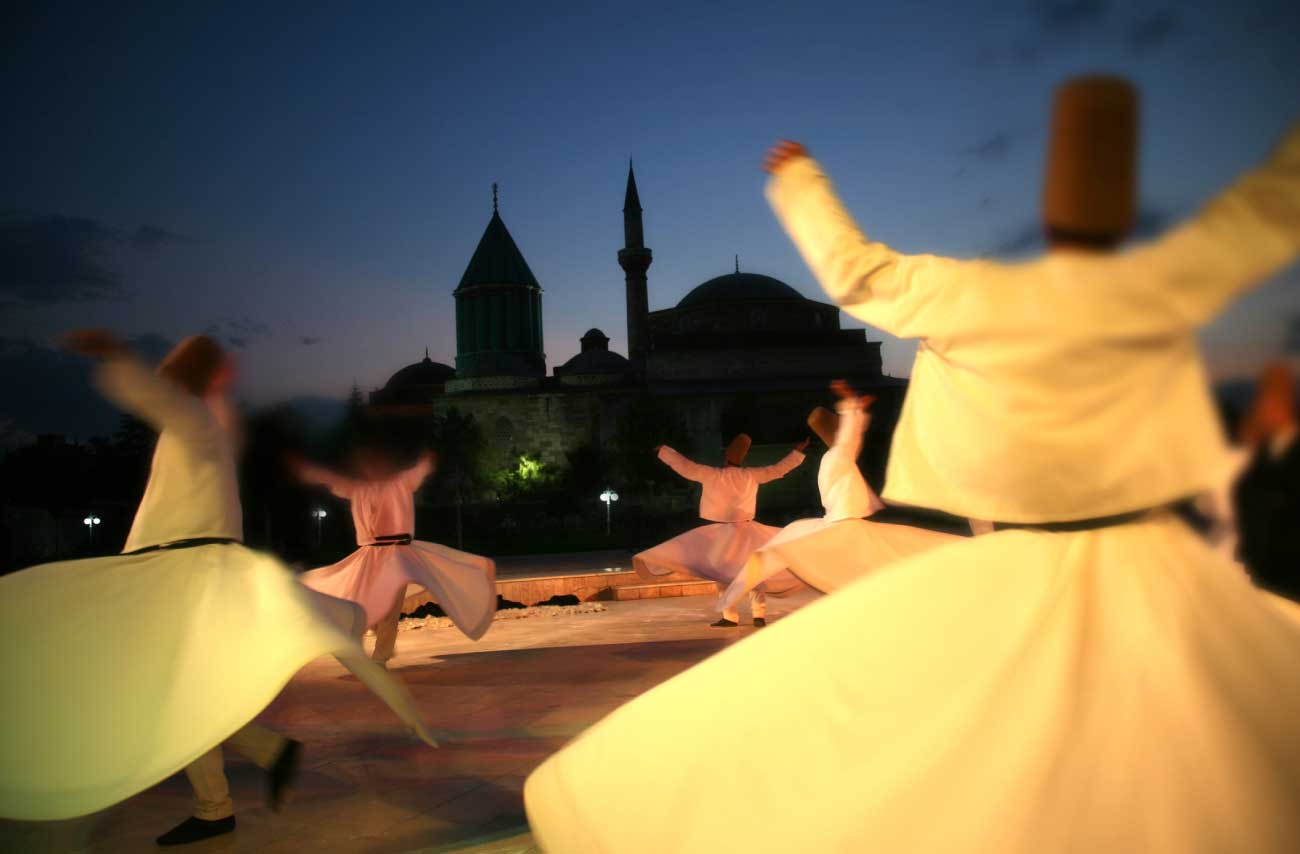 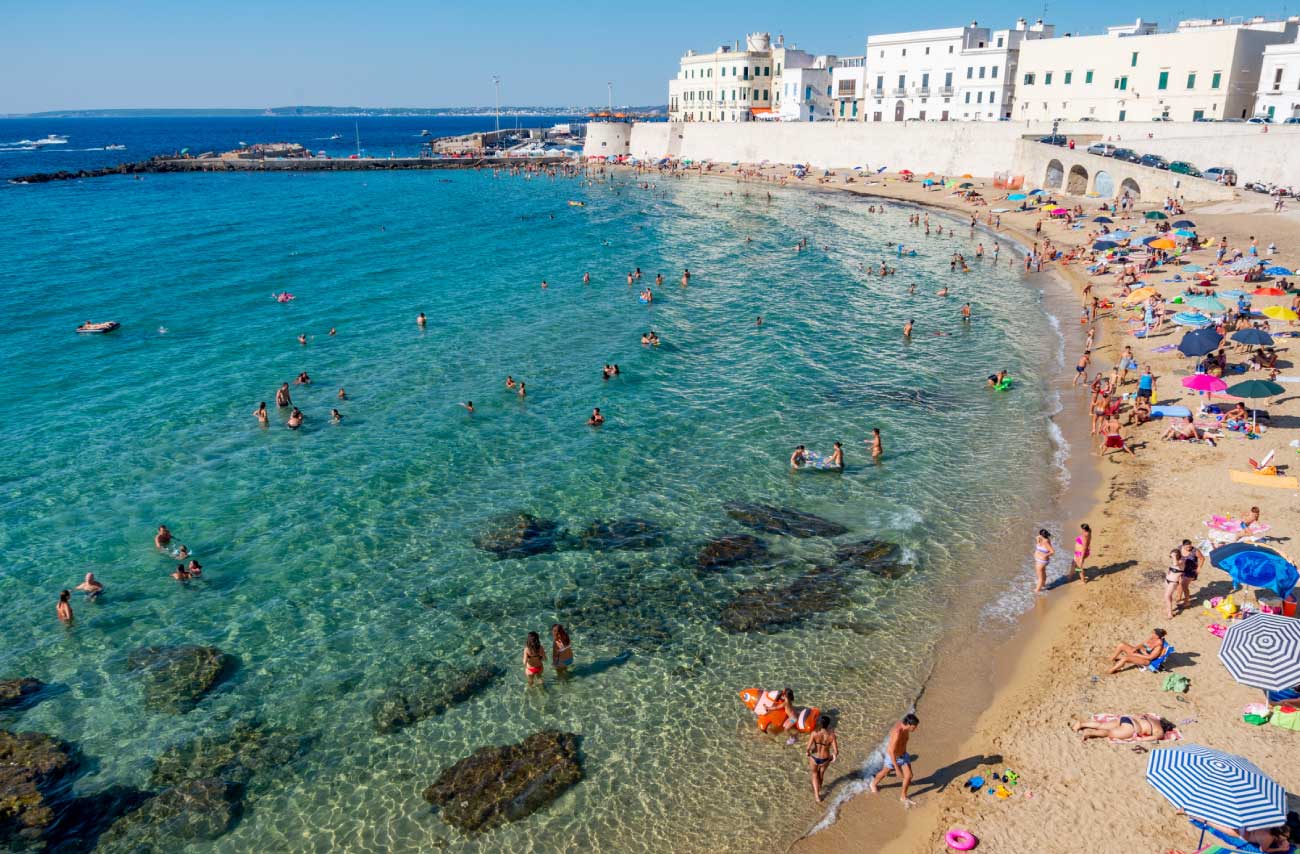 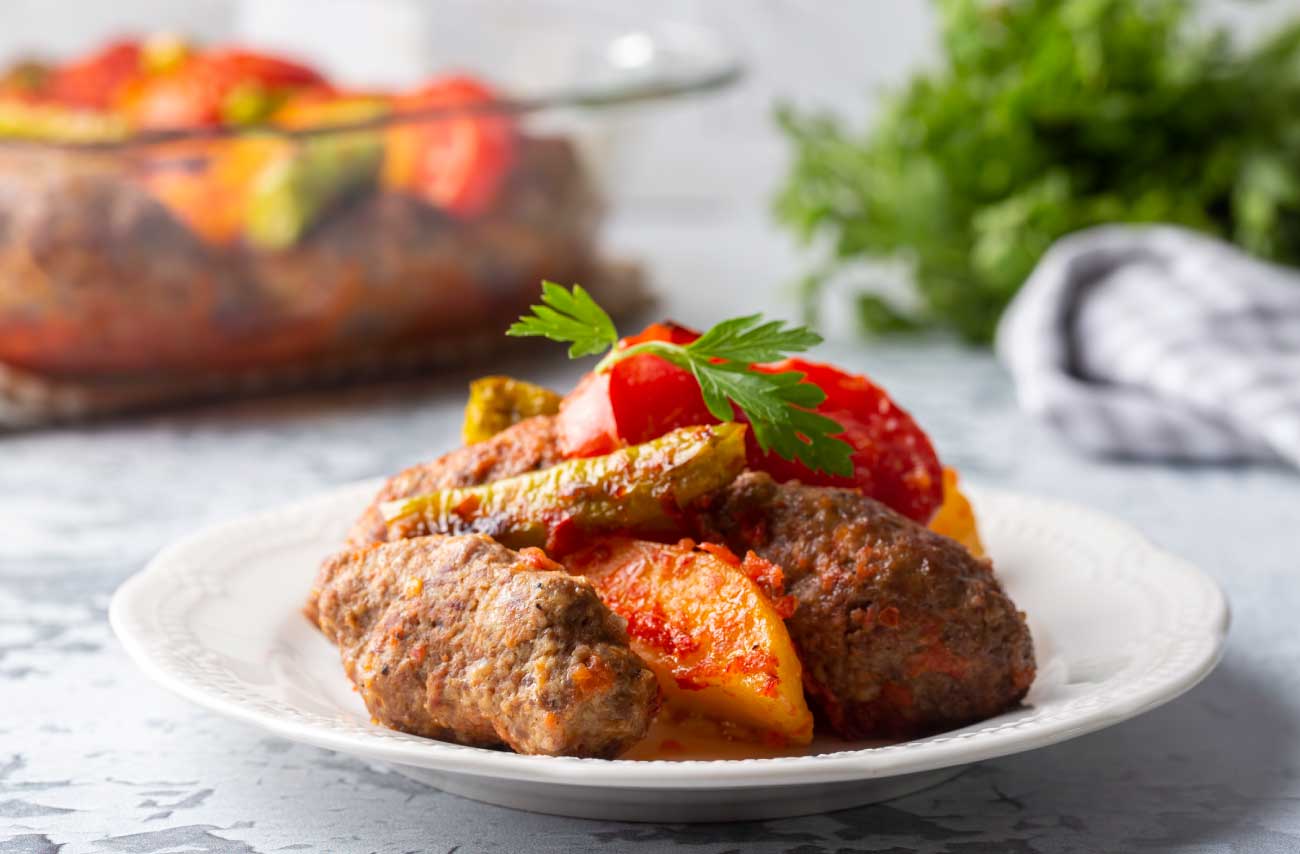 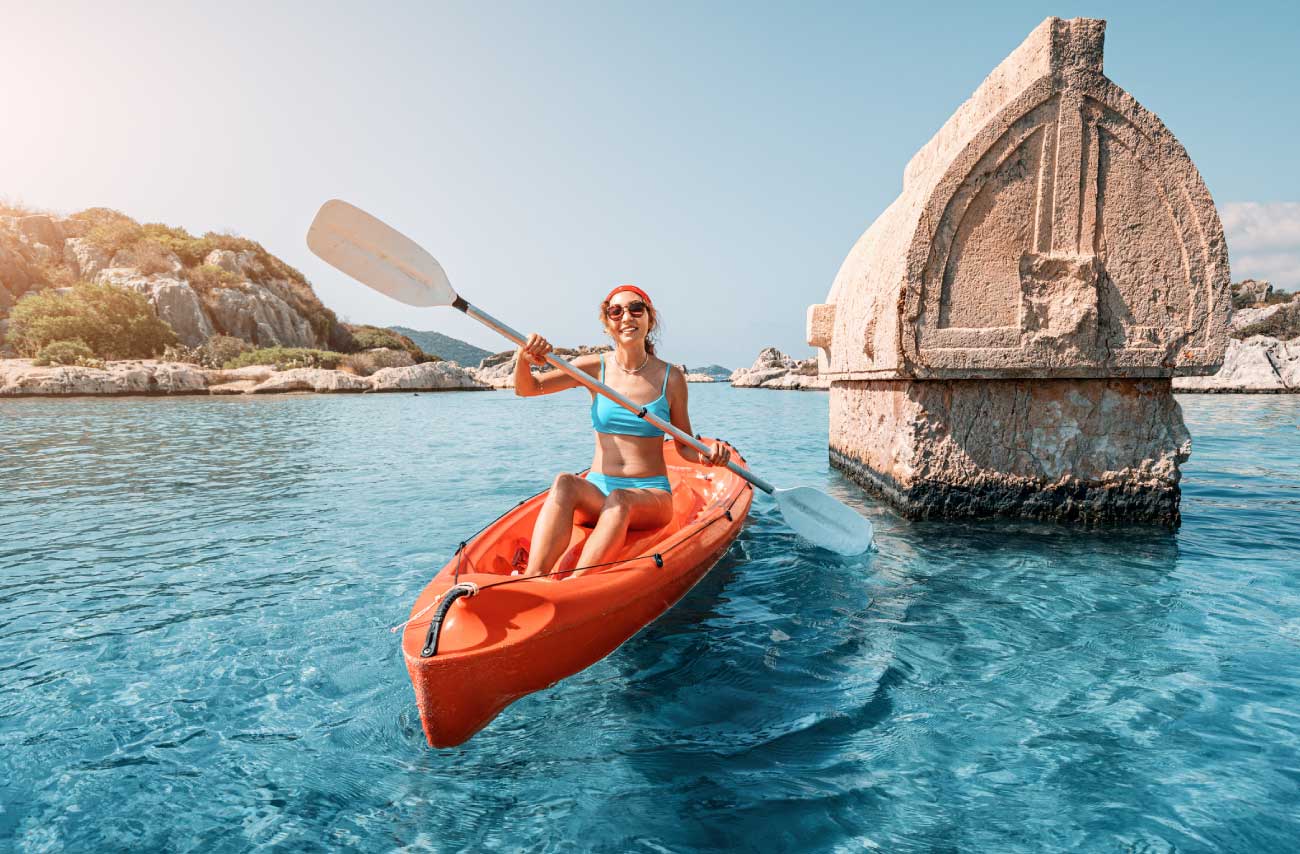 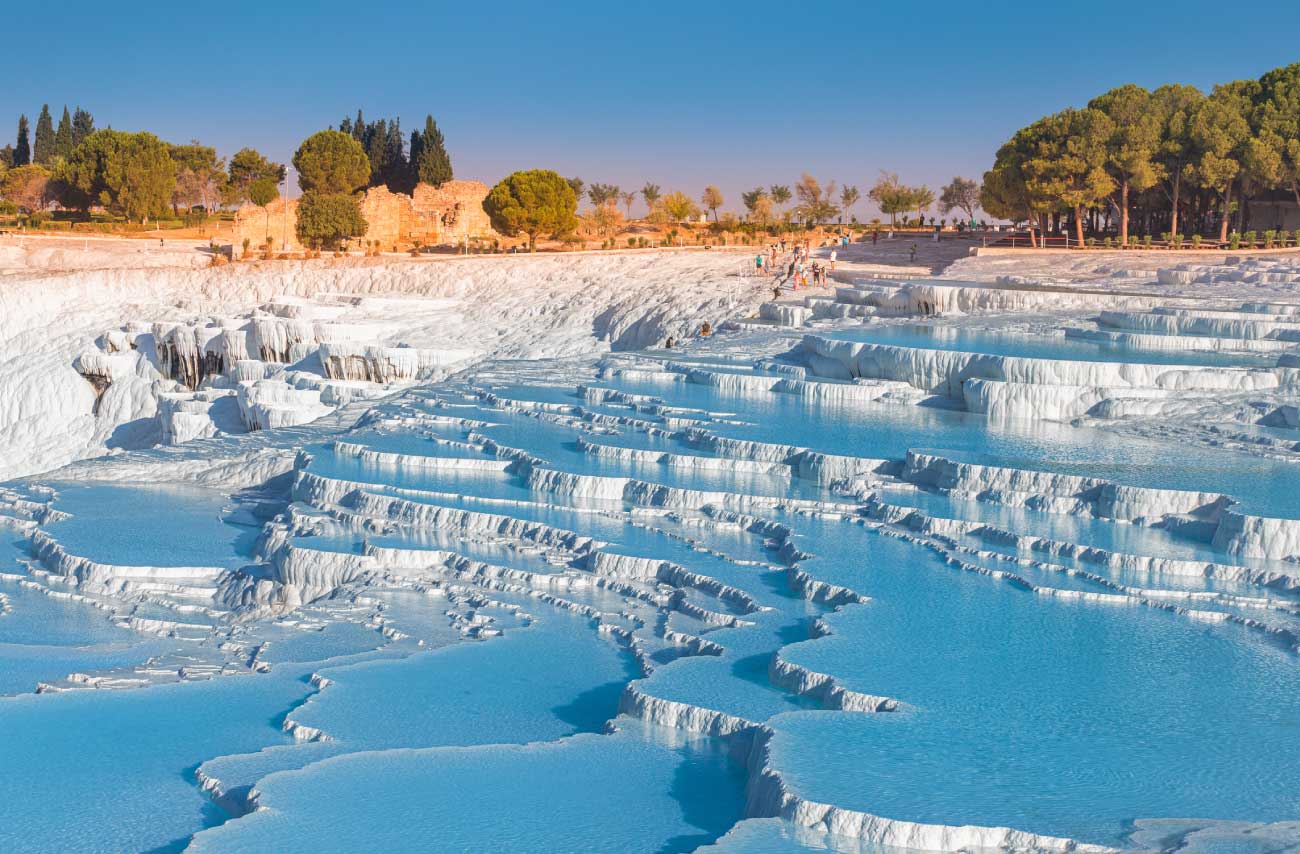 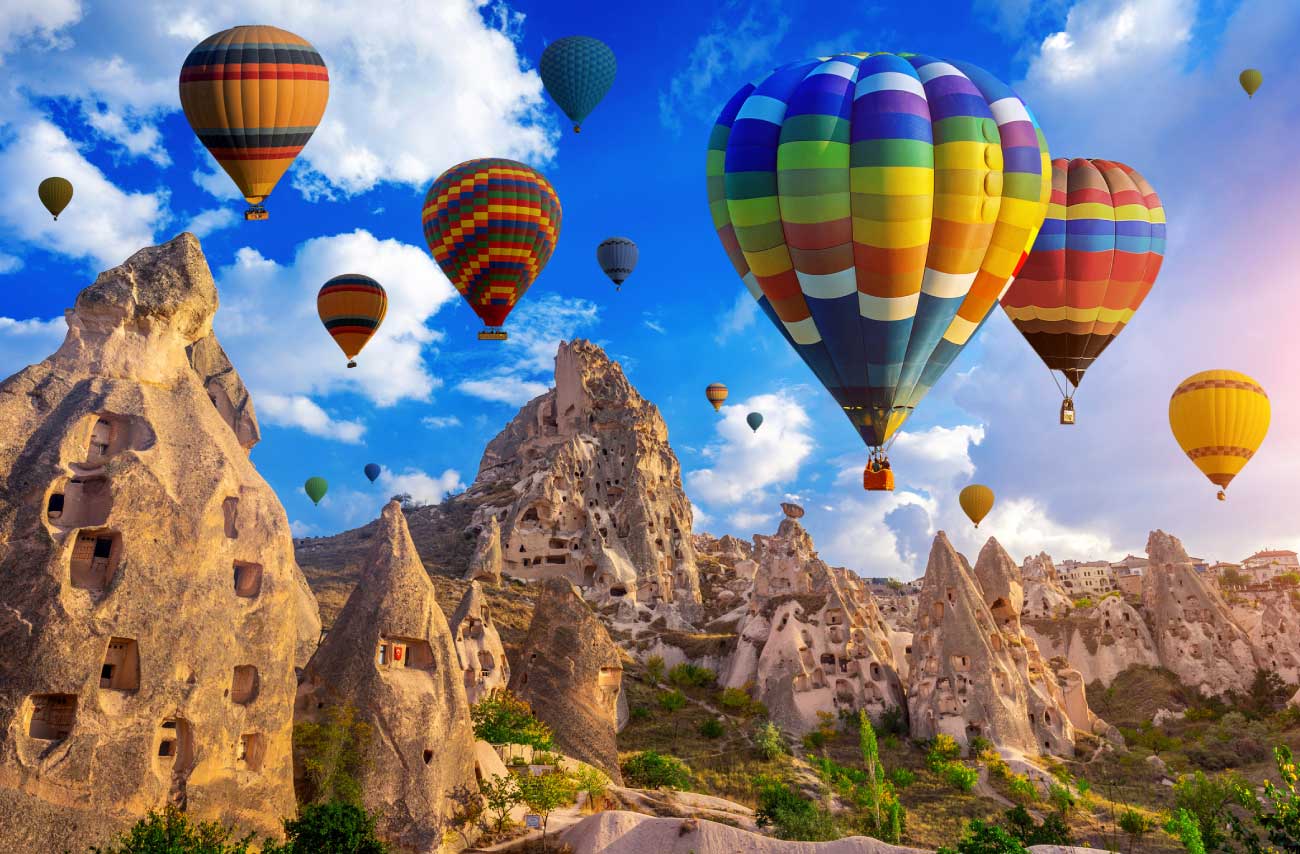